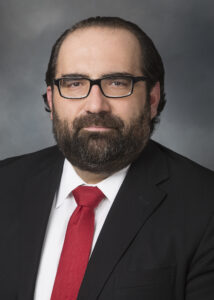 Andre Castro joined GAMA in January 2020 and serves as Director of Communications. Andre brings over a decade of experience in strategic communications, media relations and federal policy to GAMA. He previously has worked in the U.S. House of Representatives as the Communications Director for Congressman Bill Flores of Texas. While there, he managed the Congressman’s national and local media engagement, social media activity and the congressional office’s internal and external communications. Prior to Congressman Flores, Andre worked for Congressman Michael McCaul of Texas and managed multiple political campaigns in Texas.

Andre is originally from Houston, Texas, and graduated from the University of Kansas with a bachelor’s degree in communications studies. He and his wife live in Washington D.C. with their two children.