Air traffic control system modernization activities are accelerating worldwide. It is vital that aircraft owners begin to make informed decisions about how to comply with emerging and existing regulatory mandates immediately by selecting the right equipment for their aircraft’s typical mission.

Taking an aircraft out of service represents a major financial risk for operators. However, the inconvenience of having your aircraft grounded might be an even greater financial risk. This is why it is important for operators to understand the emerging and existing Communications, Navigation and Surveillance (CNS) mandates and how to address them. These mandates might be required to retain access to region-specific airspace, but can also bring additional operational capabilities that operators should not ignore. 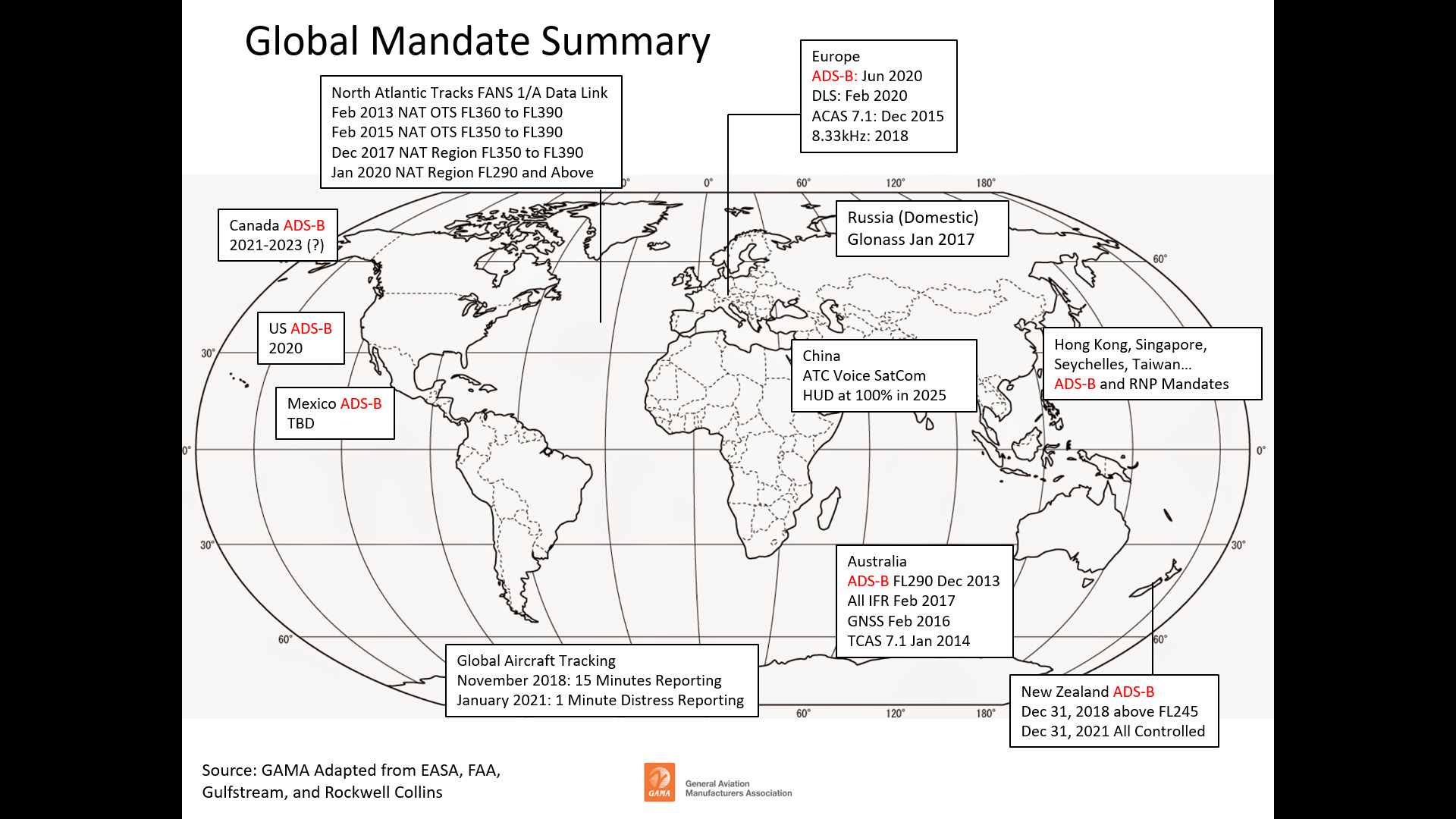 Additional facts to consider include the aircraft’s residual value which will be negatively impacted if it is not properly equipped to meet regulatory mandates. Also, a non-compliant aircraft could mean lost revenue for operators due to airspace access restrictions. Unfortunately, there is much misunderstanding, myths and outright wishful thinking within the owner/operator community.

Surveillance: Australia, Europe, and the United States as well as a number of countries in Southeast Asia have established equipment mandates. Automatic Dependent Surveillance – Broadcast Out (ADS-B Out) is a technology that uses Global Positioning System (GPS) to broadcast an aircraft’s altitude, airspeed, location and whether it is ascending, descending or turning.

Upgrading to ADS-B compliance typically involves three considerations: (1) an upgrade to or replacement of the aircraft’s transponder, (2) equipping the aircraft with a compliant GPS, and (3) making certain aircraft wiring changes. It may also involve changes to the aircraft’s Terrain Awareness Warning System (TAWS).

Navigation: The deployment of Performance-Based Navigation (PBN) is underway worldwide, but similar to the deployment of data communications – is primarily benefits-driven (i.e., without a mandate). The U.S. transitioned to a nationwide PBN-enabled airspace structure in 2009 and today over 95 percent of the primary airports have a PBN Instrument Approach Procedure (IAP). Europe is in the process of requiring that countries deploy PBN-enabled approach procedures at all runways that are not already served by a precision approach procedure. Canada is also in the process of deploying PBN capabilities in parts of their airspace.

Economic Costs, Myths and Other Considerations

There is much confusion and misunderstanding surrounding the cost of equipage for aircraft. Operators that expect to fly in airspace affected by these mandates must be equipped before the deadline However, the cost of equipping will vary greatly depending on the age and configuration of the underlying asset. In all cases, however, it is crucial that owners and operators begin to examine the options available as fast as possible for them to avoid the potentially costly consequences of having to ground an aircraft due to poor planning.

Myth: No need to rush – the mandated deadline will be pushed back.

Fact: The Federal Aviation Administration (FAA) has made clear it will not modify the 2020 deadline for ADS-B Out equipage. FAA Administrator Michael Huerta recently stated, “We would like to see the industry equip with ADS-B Out as soon as possible. Let me be clear that the deadline for the mandate is set at January 1, 2020. It will not change.” 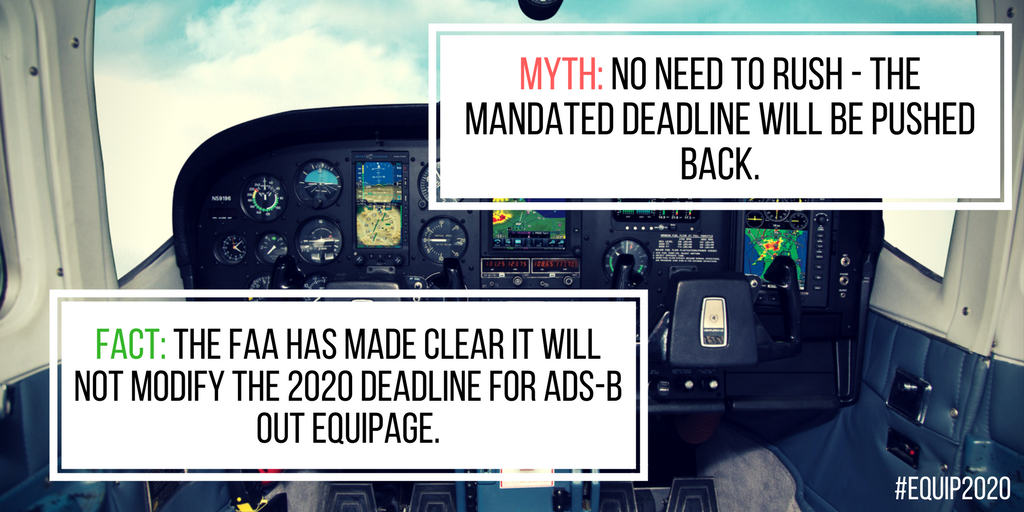 Myth: Wait until the eleventh hour to equip and the cost will go down.

Fact: While newer and cheaper solutions have entered the market, the main cost driver of this technology is the shortage of qualified maintenance facilities. Because of this situation, the demand for available slots at qualified MROs is ramping up, which is driving the waiting time up as well. Aircraft owners should also expect that avionics providers will increase prices as demand increases, the closer we get to compliance dates. 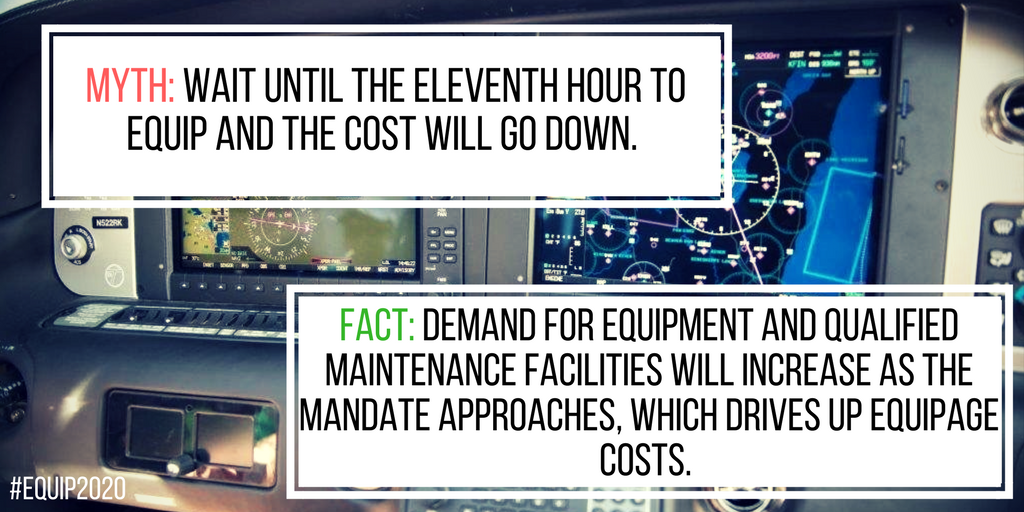 Given the significance costs involved in properly equipping aircraft, it is important that operators not only look at an immediate airspace mandate (e.g., ADS-B), but also consider other upgrades to the aircraft such as cabin connectivity. Proper planning for an upgrade will save operators money in the long-term and prevent them from having to take the asset out of service more than once.

Residual Value Impact of Not Equipping: An audit and valuation firm specializing in aircraft and aviation-related equipment predicts that aircraft not equipped with ADS-B (Out) once the mandate is out will suffer a decrease in residual value. The firm adds that this decrease will be equivalent to the average cost to acquire and install the equipment and the potential loss of revenue while the aircraft is out of service.

Download the information on this webpage as a PDF.