The General Aviation Manufacturers Association (GAMA) announced that the team from Erie 1 BOCES Harkness Career and Technical Center in Cheektowaga, New York, is the winner of the 2022 GAMA Aviation Design Challenge.  The team from Raisbeck Aviation High School in Tukwila, Washington was awarded second place.

“It is inspiring to see teams from all over the country put forth such great effort into the Aviation Design Challenge.  We are particularly proud of the work put forth by the teams from Harkness Career and Technical Center and  Raisbeck Aviation High School and look forward to rewarding these teams with additional exceptional experiences which will continue to foster interest into all aspects of general aviation. Now in its tenth year, the challenge continues to expand and grow enthusiasm for our industry,” said Pete Bunce, GAMA President and CEO.

Over 65 high school teams, representing 28 states, entered the 2022 GAMA Aviation Design Challenge. During the first portion of the challenge, teams used complementary “Fly to Learn” curriculum to learn the principles of flight and airplane design, consistent with national STEM standards. During the second portion of the competition, teams applied their knowledge to virtually modify an airplane design and compete in a fly-off using X-Plane software.

This year’s mission was to modify a CubCrafters NX Cub with a nosewheel to fly from Seattle, Washington, to Packwood, Washington, to efficiently deliver a maximum payload. The teams needed to design their aircraft to maximize transportable payload and successfully land on a small runway, surrounded by high terrain. Judges scored the teams based on performance parameters, a checklist of steps involved in the demonstration flight and a video submission in which the team summarized what they learned.

The Harkness Career and Technical Center team was taught by Tom Leach who had the following to say about the team:

“The students did an outstanding job this year working through the challenges of the GAMA Aviation Design Challenge. They used all the skills from the course along with the engineering design process to complete the project. They worked in a model where the students take the wonderfully detailed challenge with the CubCrafters model provided by GAMA and work solutions with team effort in mind. They were originally organized into three smaller divisions and near the end of the 6-week window put all the hard work from each division into the final class team design. Even two of the students: Jessica Thompson mentioned ‘I enjoyed the team structure of the project, and appreciated the real-world layout and experience,’ additionally Joe Illos mentioned “this is one of the coolest competitions I’ve done!!’. I am very proud of their accomplishments and driven effort for the challenge this year, this class of students earned this accomplishment.” 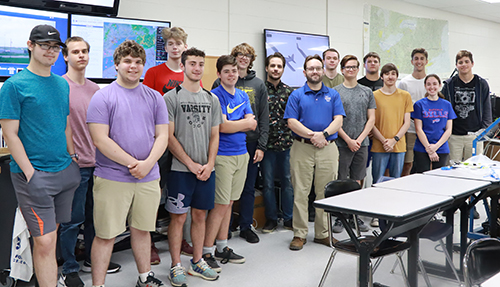 To learn more about the organizations involved in structuring  the competition, visit gama.aero, flytolearn.com and x-plane.com.